Obviously, this is a blog. It is a place I write some thoughts that I would otherwise keep to myself. I'd probably explode if I kept all this to myself, so I write. 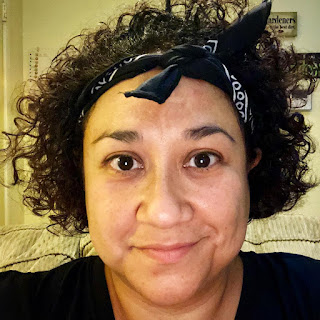 As part of my commitment to self-care and well, sanity, I thought I would work on building my writings and start something new, possibly fun. I have a few friends that have vlogs. They really love making content and one even encouraged her daughter to start her own channel. So here I am, taking a leap into video and well becoming a parent of a young YouTuber myself. I'll be talking to here tomorrow about how to manage a child on YouTube. Maybe she has words of advice.

While I have lots of things to say, the first video was a bit of a challenge. I'll talk later about how I regret that one Christmas gift the kids wanted in an upcoming video.

But first, the video. This first attempt the lighting wasn't quite right. I guess when I set it up earlier in the day the camera really enjoyed all the bright lights. But come evening the camera wanted nothing to do with the bright lights. I adjusted. Then I didn't like how I looked. SO I put some make-up on. Then I got started. The first video was really nice, just wish I had recorded it. :)

Here is my first video. Nothing much yet. But how do you eat an elephant? Well, one bite at a time of course. --->https://youtu.be/X5WEqhJjXo8
Posted by Pamela at 9:47 PM No comments:

We Believe: The Best Men Can Be

I am a mom. A woman. I have 3 young boys. One day they will be men. This week the internet and television exploded after Gillette published a short film asking men if this is the best men can be. I've watched this advertisement-film many times.

If you somehow have failed to view this 1-minute-and-50-second film,  titled "We Believe: The Best Men can Be,  I suggest you view it to judge for yourself.


This film is about men and their responsibility for their role in our society. Society is made of men, women, and people who are non-conforming to the binary genders. In society, all people have responsibilities to improve the lives of each other, themselves and the future generations which is not worthy of protest. This film shows us the worst side of the typical man in America. If you are a woman or non-conforming person, this is sadly what dominates the interaction with "men". Men are at the top of the pyramid in our society.

The film starts out with a middle-aged man staring at himself in the mirror.  He is the proverbial man in the mirror, Micheal Jackson sang about. You hear the newscaster shout "Bullying" which is common in our schools and workplaces. Just take a look at these tales of bullying at schools and this racial bullying example from GM manufacturing plant against black workers..

Then the newscaster says, 'The #metoo movement", and yes, yes, many men, even the majority of 'men' scoffed at the #metoo movement as some crazy liberal feminist nonsense, but it is an outcry for women and men to tell the survior stories of sexual misconduct that has gone unacknowledged and were often hidden.

Then a narrator asks "is this the best a man can be?". Example after example of 'men' behaving poorly blazes across the screen, bullying, sexual harassment, mansplaining, looking the other way, allowing physical boundaries to be crossed, chanting "boys will be boys", as otherwise good 'men' take steps to stand up for what is right.

At 53 seconds as Terry Crews says "Men need to hold other Men accountable". Right there is where men who don't represent the best of men get angry.  Is it because they find in themselves that they are the ones telling "women to smile'? Are they angry because it is not appropriate to follow a woman as she goes about her daily business and cat-call her? Are they the Harvey Wienstiens of the world? Are they the 'grab them by the pussy' type of guy talk and do they find being told this behavior is NOT very appealing to either men or women? Are they the men telling the next generation to Man up and not be a pussy? Did this short film cause them to look in the mirror and see a reflection they didn't like?

As a mother, it is my responsibility to teach my 3 boys to be better than their father. It's probably his responsibility too, unfortunately, he has allowed all the bravado of the US Marine Corp and its toxic masculinity to become less than the best of men. I've never subscribed to the 'boys will be boys' mentality and at times have argued loudly with my own mother for saying that to me about my former husband and to my boys in regards to their behavior. Men are not awful and they don't need to be harmful to other men or women around them to show their masculinity. Boys will be exactly the type of men we teach them to be. We want our men to be masculine, to stand up against the wrongs in this world for those that don't have a voice. We want our men to be honorable the way a Boy Scout instills trustworthiness in strangers. We want our men to know they are the one man that has the power to change this world. They are the men that can be the best.

Posted by Pamela at 2:32 PM No comments:

Email ThisBlogThis!Share to TwitterShare to FacebookShare to Pinterest
Labels: Boy Scouts, Gillette, kids, men, the best a man can get, We Believe: The Best Men Can Be

I've had it with 2018! It was painful in so many ways.  First, it started with the recovery from a heart attack, well 2, and unemployment as a result. Though I did have a 'side-hustle'. Recovery from a heart attack is about 30% physical and 70% mental. I've heard of people who had no choice but to return to full-time employment just days or weeks after a myocardial infarction or heart attack and I see that after that they don't "recover". They stay in survival mode and typically get sicker and sicker as the years go by. In large part, because they didn't have time to reflect on what went so wrong and how to fix the damage that had been done. Like I said its 70% mental.

My recovery has been difficult. I did not do well on a medication called atorvastatin. I thought my ADHD was getting worse or that I was just stressed out from the incident. But when I couldn't carry on a conversation or remember the sentence I had just read, I complained. I wasn't listened too. When I was I couldn't remember what the instructions were. Hahaha. It was terrible. Eventually, I had leg pain, this burning, tingling, needling sensation that would not stop. It got to the point where walking from the bed to the bathroom was an endurance event. When I reported that symptom the cardiologist immediately took me off the atorvastatin and wanted me to take another similar 'statin' medication. I refused. He's really not happy about that. Neither is my Family Doctor. But Life needs to be enjoyable not just "longer" as he claims. Though the scientific studies show it only extends the life of a heart attack survivor by 5 days. I'd like those days to be pain-free.

In addition, I had my Mother living with me for all of 2018. I don't know if you realize this but mothers and daughters should not live together as adults. It is awful. It is confusing. It is not something I recommend to anyone that can avoid it. While I love my Mom, I never want to live with her in the room next door to me, at least not for as long as she is working her bizarre 2am - 11am+ schedule. She requires absolute silence! I have 3 kids, 2 dogs, and 4 cats. Silence isn't something we are capable of delivering. Some days she would get home shortly after 11am and I would be required to "be QUIET" so she could nap. That meant my 'side-hustle' could not be done because I "talk too loud" according to my mother. It also meant things like dishes couldn't be done because the clanging of the dishes was too loud as was the dishwasher. No yard work, not that I really wanted too, but it was out. All the organizing and hanging up of pictures or moving furniture so you could de-clutter the house was also out. I may have ADHD but I HATE clutter. Agh. It was everywhere. Maybe a touch OCD about the clutter. Everything must have a home in my home or I throw it out. Kids hate that. :)

I know what you're thinking...why just not do all the things before she returns home? Well, the woman never communicated what time she would be home. And when she was home she would stuff herself into her 'bedroom' lock the door and turn the TV on to CNN. She called that napping. But I was required to keep the place quiet until the kids went to sleep because shortly after her 'nap' was her 'bedtime'. Do you know how difficult it is to keep silent while cooking dinner?

Just to make things more inconvenient the Washer and Dryer were located in her room. But as all children know you can't go into your parents' room. So I couldn't wash clothing at will. I had to wait for her to do it, then listen to her complain about it. Now I had an answer, we could go explore the front closet in the living room where the previous owner claimed the original laundry room was. But I couldn't do it because if I got caught doing something 'difficult' like removing a false wall panel and testing the outlet and water supply there would be lots of words from her on how I needed to take it easy because I had had a heart attack and she didn't want me to die. Yea guilt trip. So she did the laundry, then complained about doing it, but complained more if I went into her room to do the laundry before she came home.

So now she is gone from the house. And I need to find a way to quickly cover the expense of the mortgage. SO her absence is both a blessing and a bit of a challenge. My side hustle with my partners is in shambles. That's a story for another day, maybe another or two I have. Anyway's I am making my own side hustle. I am going to restart my old business Binary Digital Media. I am working on the business plan so stay tuned for what that turns into. Maybe websites, maybe websites and social media, who knows. I've got until the weekend to figure that out and update my old website http://www.binarydigitalmedia.com. I have a potential website client, that was referred to me by a friend so I may have a few hundred dollars coming in this month. I have to work on the household budget too, see what I can do to make it all work in 2019.

Glad to leave all that crazy in 2018 and tidying the house after my mom left was a nice stress reliever.